Minoca OS is a general purpose operating system written from scratch. It aims to be lean, maintainable, modular, and compatible with existing software. It features a POSIX-like interface towards application software, and a growing suite of popular packages already built and ready to go. On the backend, it contains a powerful driver model between device drivers and the kernel. The driver model enables drivers to be written in a forward compatible manner, so that kernel level components can be upgraded without necessarily requiring a recompilation of all device drivers.

Minoca OS is event driven, preemptible, SMP ready, and network capable. It currently runs on x86 PCs and a range of ARM boards. 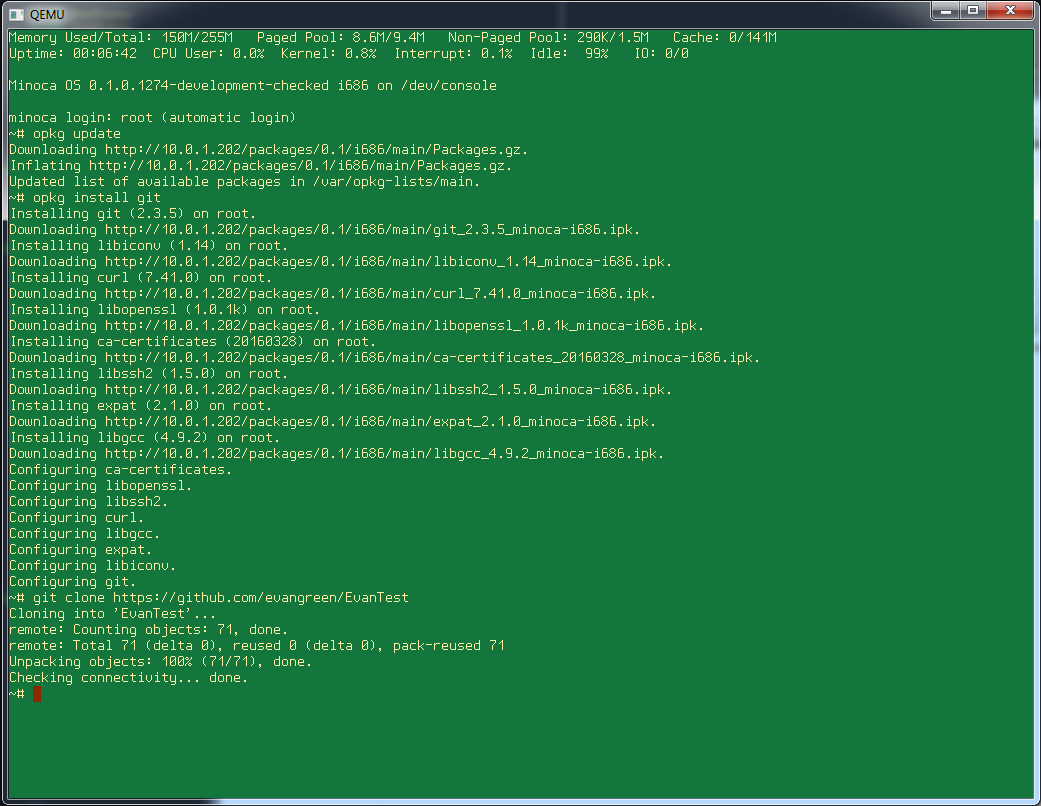 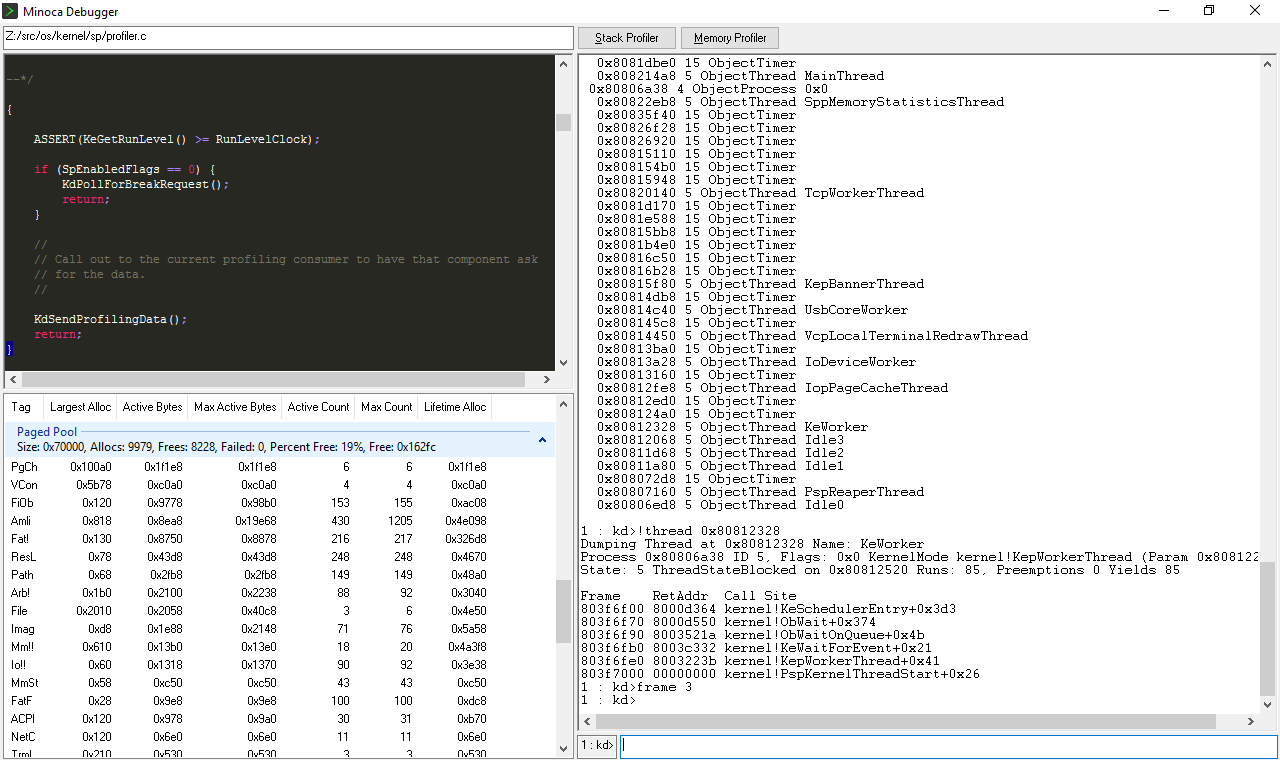 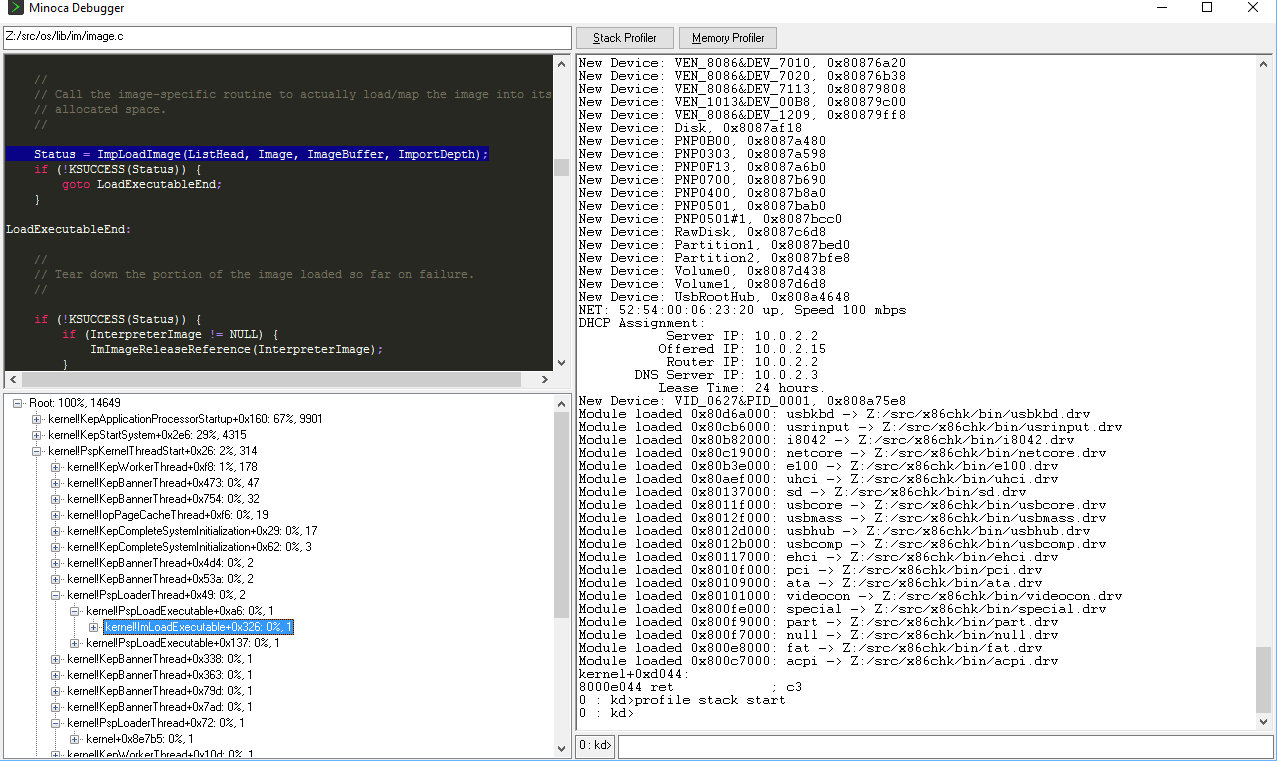 If you're just looking to try out Minoca OS, head over to our download page to grab the latest stable images. The rest of this page describes how to use this repository to build your own custom image of Minoca OS.

The paragraphs below will get you from a fresh clone to a built image.

The Minoca OS build environment is keyed off of a few environment variables you'll need to set in order to orient the build system:

To build Minoca OS you'll need a Minoca-specific toolchain for the particular architecture you're building. Prebuilt toolchains can be found here. If you want to build the toolchain from sources, you'll need to check out the third-party repository and run "make tools" in there.

Run make to build the OS for the particular architecture you've supplied. Parallel make is supported. The final output of the build will be several .img files located in $SRCROOT/$ARCH$VARIANT$DEBUG/bin/*.img. For example, the PC image is usually located at $SRCROOT/x86dbg/bin/pc.img. This is a raw hard disk file that can be applied directly to a hard drive or USB stick to boot Minoca OS. The image install.img is a generic installation archive that the msetup tool can use to create new Minoca OS installations on target disks or partitions.

Object files are generated in $SRCROOT/$ARCH$VARIANT$DEBUG/obj/os. You can run make clean, or simply delete this directory, to cause the os repository to completely rebuild. Alternatively, you can run make wipe to delete all generated files, including the third-party tools you built or downloaded. Running make wipe simply deletes $SRCROOT/$ARCH$VARIANT$DEBUG/. We usually stick to make clean since make wipe requires a complete rebuild of the toolchain.

A note for macOS users: We've managed to build successfully using both GCC from XCode 8 (really clang) and Homebrew GCC, both using the 10.12 SDK. Some users have reported that they need to export SDKROOT=$(xcrun --show-sdk-path) to build properly.

To boot your built images, you can write the appropriate image for the platform you're trying to boot to a USB flash drive or hard disk. On Windows, you can use the Win32DiskImager tool (included in the tools repository under win32/Win32DiskImager). You can also use the msetup tool to build custom images. If you use the msetup tool to install Minoca OS onto a partition of a disk containing other partitions that you care about (such as on the same machine you're building from), we highly recommend making a complete backup of your disk. Minoca OS is still new, and we wouldn't want a bad bug to wipe out all your data.

If you're building Minoca OS on Windows and have downloaded the tools repository, several shortcuts have been set up to allow you to quickly run a Qemu instance with the images you've just built. Make sure you fired up the development environment with the setenv.cmd script. Type run, then dx to fire up an x86 Qemu instance of pc.img with a kernel debugger attached. We use this internally for faster development. If building for ARM, it's runarm and da.

Below is a brief orientation of a few of the directories in the repository. Check the Makefile in each directory for a more detailed description of what that directory contains.

Submissions are welcome! See our CONTRIBUTING.md page for details, or our WISHLIST page for suggestions. Bugs can be reported here on Github.

Minoca OS is licensed to the public under the terms of the GNU General Public License, version 3. Alternate licensing options are available. Contact info@minocacorp.com if your company is interested in licensing Minoca OS. For complete licensing information, see the LICENSE file in this repository.